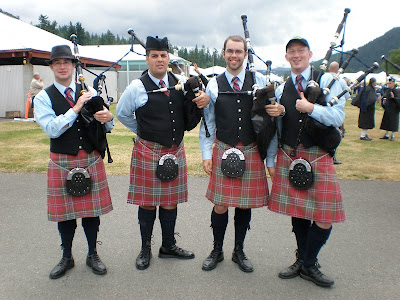 Congratulations to Ross Morrill and Justin Howland who have had a successful season competing in BC with the grade one Triumph Street Pipe Band.
This past weekend they also competed as quartets and took home first prize against quartets from SFU! An amazing feat!
This weekend they will be playing for the title of North American Champions in Maxville, Ontario. Best of luck boys!
Congrats again to Ross and Justin, now bring some of that sizzling BC piping home so it can rub off on the rest of us!
Posted by John Miner at 8:32 PM 3 comments:
Email ThisBlogThis!Share to TwitterShare to FacebookShare to Pinterest
Newer Posts Older Posts Home
Subscribe to: Posts (Atom)